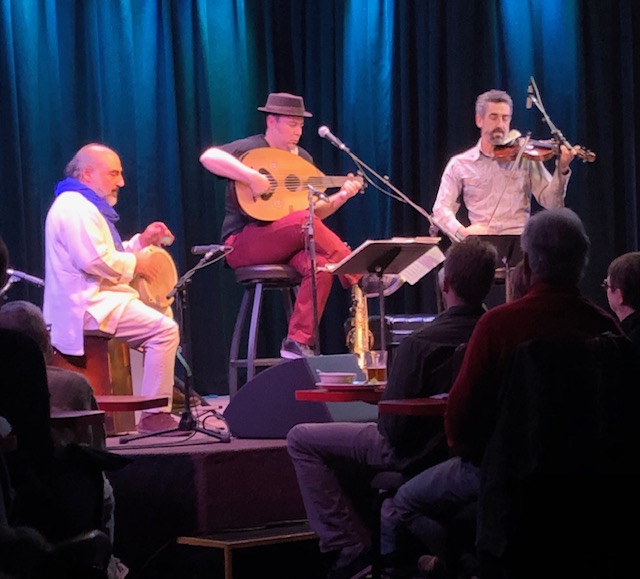 This winter, we had the pleasure of meeting Dr. Samuel Torjman Thomas and hearing him perform Moroccan music in concert, where he sang in Hebrew and Arabic while playing the flute and the oud, a Middle Eastern lute-like instrument. He was accompanied by Jeremy Brown on the violin and Dror Sinai on the drums.

Dr. Torjman Thomas is hard to encapsulate in one sentence, as he engages in an eclectic mix of interconnected fields. He’s a self-described artist-scholar, an ethnomusicologist and multi-instrumentalist. Alongside these intersecting disciplines of academic study of art and artistic practice, he also teaches at the City University of New York and holds the position of artistic director of multiple music ensembles, including the New York Andalus Ensemble, which he founded.

You can read more about his work and hear his music at samueltorjmanthomas.com.

In the first week of January I was fortunate to attend a guest lecture Dr. Torjman Thomas gave on campus. He played several songs alongside Jeremy Brown and Dror Sinai and discussed music as a field of inquiry.

He described music as “a language of universals, an expressive means.” Like spoken languages, music develops differently in different regions, affected by things like migrations. It is an expressive tool of cultures, developed through both organic processes and intentional, systemic ones, such as the way that iambic pentameter—a pattern of stressed and unstressed syllables in poetry—was developed intentionally over time. All together, the combination of organic and intentional development of a given region’s music offers us insight about that region and its people.

Playing music and academic study don’t always go hand-in-hand, but for Dr. Torjman Thomas, they are intertwined. When a student asked him why he chose to study and play North African music, he told the class that his interest comes from personal, familial connections; his mother was born and raised in Morocco, and along with being Jewish, he has an interest in highlighting lesser-known North African history and culture.

We asked Dr. Torjman Thomas how traditional Andalusian music is still relevant today, especially given so much polarity in our current global sociopolitical climate.

Dr. Torjman Thomas described that the music responds to modern politics of separation with a strong political statement. New York Andalus Ensemble (NYAE) began with the intention to create a space to make music with participants of different ethnic backgrounds. Likewise, Asefa Music was formed in response to the attacks on the World Trade Center in 2001.

Both the NYAE and Asefa Music ensembles with are heavily influenced by Morroccan music and the traditional music of al-Andalus, which was once Muslim-Spain spanning the Iberian Peninsula during the Middle Ages. During that time in history, there was a peaceful coexistence between three Abrahamic religions in Spain – Christianity, Islam, and Judaism – termed the convivencia. The cross-cultural unity brought about a distinct regional aesthetic and sound, and represented a culture of tolerance and cooperation.

As he studies it, music is a field of inquiry which informs our study of history; but it works both ways – history also informs our study of music, and both come alive in the New York Andalus Ensemble. Dr. Torjman Thomas formed it with the direct intention to embody multiculturalism, amplifying the early convivencia that early al-Andalus had experienced with Jews, Muslims, and more creating music together. In our current sociopolitical spectrum, the collaboration between communities made possible by the NYAE is a strong political statement.

We also asked if there was anything he’d like to say to the Leviathan readers.

He explained that there is a place for “a Jewish angle.” But what does that mean? There are lots of types of Judaism, both in terms of ethnic groups and Torah based traditions. He stressed that we should make sure that cultural heritage comes out; say it informs our work, whatever that may be, and be incredibly proud of our place in the tapestry of humanity. “We should be proud of our place in the fabric of humanity. Can you imagine the tapestry of humanity without the Jewish color?”

Everything is interconnected, Dr. Torjman Thomas continued—and not just on the surface level. It brings more respect for all cultures to highlight the Jewish aspect; because of diaspora, there is Jewish participation in so many societies, in so many ways. We can be proud of the inherent humanism we have, if we choose to bring it out by juxtaposing Jewish integration and elements of difference.

Jewish people who are forming an identity have to decide: will it be informed by some aspect ofJewish heritage or not? That’s a really fundamental choice. Why occlude some part of your perspective?

Amanda and I accepted an invitation to see Asefa Music perform on a brisk January evening at the Kuumbwa Jazz Center downtown. Asefa Music, similar to the New York Andalus Ensemble, is comprised of an impressive number of musicians. However, during this set, Dr. Torjman Thomas played the oud, flute and saxophone with accompaniment by just two other musicians: Jeremy Brown on the violin and local percussionist Dror Sinai, who played the bendir, a traditional North African hand drum.  Despite the pared down ensemble, the group offered an impressive sound that filled the venue and captivated the audience.

During the beginning of the set, Asefa played a song named “Rise Up and Come to My Garden”. The song incorporates Sephardic liturgical melodies, known as the bakashot tradition. The melodies, infused with spellbinding oud and violin along with the rhythmic pulse of the bendir, felt like an incantation. Immediately, I was transported from the crowded room, letting my mind wander to distant lands and across time in a waking dreamscape. Dr. Torjman Thomas explained the bakashot tradition was used in the synagogues of Morocco.

While I watched the performance, I thought about our discussion with Dr. Thomas earlier that day. Dr. Thomas asked us to imagine history without a Jewish history, and said, “We should be proud of our place in the fabric of humanity. Can you imagine the tapestry of humanity without the Jewish color?” Truly, this is unfathomable. Jewish history is a significant part of history as a whole and through our own participation, whether Jewish or not, we in turn become a part of a larger story that lives and breathes to this day.

“Asefa” means gathering in Hebrew.  The intent of the group is to defy time, space and division by preserving and performing traditional music in an ethnically diverse ensemble. As the performance progressed, I felt more entranced, not just by the music itself, but by the idea Dr. Torjman Thomas planted in our heads during our discussion, that the world would be unimaginable without a Jewish history and the Jewish story.

Gathering for the purpose of celebrating and participating in Jewish culture, whether it is listening to music or reading a Jewish publication, allows us to be a part of something greater than ourselves. As Dr. Torjman Thomas suggested, in doing so, we become “a part of the Jewish story.”