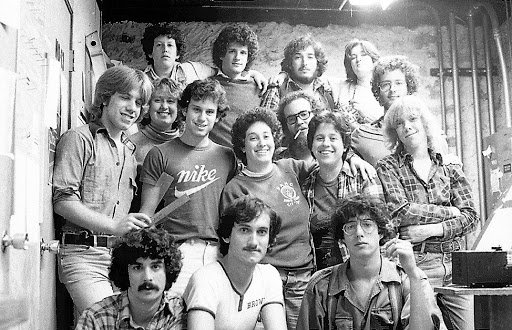 Inclusivity and Accessibility in Jewish Spaces: An Interview with Aliza Abrams I conducted an interview with Aliza Abrams, a former Leviathan editor who participates in the Jewish community with her son through Camp Newman, a Jewish summer camp in Santa Rosa. Aliza’s son has special needs and Camp Newman offers a family weekend in which Aliza and her family experience a perfect fit with a new, inclusive atmosphere. We speak about how the features of Jewish spaces affect how those with special needs feel in these environments. In my research at UCSC, at the Re-Embodied Cognition Lab in the Psychology Department, I have been attempting to make public spaces more accessible and establish social connectedness within community through robots. Both Aliza and I strive for a similar goal: making those who feel out of place feel in place by providing a way to make that possible.

Natalie Friedman: When you were in Leviathan, what did you do?

Aliza Abrams: I was a decent writer, but I’d never really done any journalism. Somehow, I got pulled into being the editor because they [at Leviathan] knew I spoke Hebrew. I was doing an independent Hebrew course with the father of one of the former editors, Shalom Caspi. [At Leviathan,] they said, “why don’t you be the editor and we’ll just teach you?” I’m like, “I don’t know what I’m doing.” And I became the editor. I did this completely backwards. In those days, you know, it was all laid out and pasted. Everyone did everything. I was a good copy editor, but I had no idea what I was doing.

I was completely flying by the seat of my pants. We did all our work at City On A Hill. We only had the weekend to put it together. We’d stay up all night for like three days and get the whole thing done. Of course, nobody would get their articles in on time. So it was all in three days and everyone was up for three days. Oh my G-d, it was crazy.

NF: Were you mostly editing other people’s work or were you writing also? Do you have a favorite piece that you remember?

AA: At the beginning, I don’t think I was writing, [only editing]. I did a piece called “Journey through Africa” which I interviewed [someone in] New York at a conference. A bunch of us went and I interviewed a guy named Baruch Tegegne who actually became sort of a hero in Israel. He was one of the people that helped get a huge amount of Ethiopian Jews out of Ethiopia to Israel. He died about 10 years ago. The article was actually published in the Baltimore Jewish Times and I think a couple other places too. But I interviewed this guy in New York in Hebrew and had to translate the whole thing to English. It told his whole story of leaving Ethiopia and walking across Sudan. That was an amazing story and I was so privileged to be able to interview this guy. That was the second year I was involved in Leviathan. A bunch of us lived together on Broadway and Ocean. There were five of us living together. We had this crazy Leviathan house.

NF: Can you tell me more about your son?

AA: He went to Camp Newman and then he was a counselor. I went to family camp also. I have two kids. I have a daughter who’s two and a half years older and then I have my son. My daughter is neurotypical. My son wasn’t diagnosed with autism until he was 13. He didn’t go to Hebrew school because he just couldn’t handle it really. He wanted to have a Bar Mitzvah.

We started going to family camp [at Camp Newman] when he was eight or nine and he loved it there. He felt normal there. The services were just amazing because they were no-shush services. It means people can be in services and nobody’s going to tell them to be quiet. A lot of the kids are autistic or have cerebral palsy, et cetera. They make noises and nobody’s going to tell him to be quiet and my son wasn’t unnecessarily loud but he could never sit still. He always took his shoes off and [here] nobody was going to tell him [not to do that]. He ended up having his Bar Mitzvah there. He’s a counselor now and I go up and I work in the art room and I’m a parent liaison.

NF: When did you begin thinking about how Jewish spaces were affecting your son?

AA: Hebrew school didn’t work very well. We tried to bring him into day care and that didn’t work very well and he would come into the synagogue and he just couldn’t. He would make too much noise or take off his shoes or he just couldn’t handle it. And it was very frustrating. He’d want to leave after 5-10 minutes and then he’d embarrass his sister. We just didn’t know what to do, you know? And at that time we kept trying to get help for him. He couldn’t get the right help. I developed some really bad physical problems that developed into a severe form of arthritis. I felt like I didn’t get very much support. We did try meeting with the rabbi and getting some support for this, [connecting us] with the families that had kids that had issues. Nothing really ever helped.

And the first thing that felt like a lifeline of any kind was this family camp. From the first year, I was like, oh my G-d, we fit. My son decided to have his Bar Mitzvah at camp. When I asked him about it, he told me, “Mom, all my best friends are there.” He only saw them once a year, but they were his best friends. There were other kids like mine and there are other families like mine. NF: In synagogues and Jewish spaces, in my experience, you have to act a certain way. You have to be quiet at certain times and you can’t walk around wherever or whenever you want to. When one doesn’t have an impulse to move around, one may not notice these restrictions. Do you feel like the intersection of Judaism and the subject of people with disabilities is particularly unique? Why? Does Judaism provide a space where people with disabilities can be accepted more so?

AA: You’re right. See, there’s an expectation that you must act a certain way, and they [people like my son,] can’t. It’s starting to [get better]. I think in the Orthodox community, from my own observations, it’s actually better. They’re much more accepting.

One of the cool things about this camp is that there [are] a lot of service animals. So some of the kids will gravitate towards the service animals and that will help them calm down.

NF: Do you feel like the connection with your son has changed over the years?

AA: Oh yeah. We didn’t have the right diagnosis. My son became extremely aggressive and violent and we ended up having to send him to residential care. He was not even speaking to me for a couple of years. It was really, really painful. But what happens over the years, you know, he got the right diagnosis and a lot of treatment.

My daughter finally got enough attention and my son and I now have a really wonderful relationship. It took a very long time. I have bipolar disorder and that affected our relationship a lot too. He’s grown up a lot. He’s very functional and at 13, we had no idea if he was going to be functional. He was verbal, but his receptive language wasn’t very good. He used to get very frustrated because he couldn’t process very well or say what he needed to say for a long time.

It’s taken a lot of time to learn how to be appropriate and stuff and not lash out. But he’s really good with kids that are like he was and he knows just how to deal with them. It’s hard for people with autism to get from point A to point B. It’s hard for them to get started but once they’re started, they do okay.

NF: Tell me more about your son’s relationship with his sister.

AA: He has a really good relationship with his sister now and they didn’t have a good relationship before. They’re really close, which  to me, is so important that they were able to mend their fences. They need each other. He’s always gonna need some help, and she wants him around. A lot of the kids that have siblings with disabilities are into acting. My daughter is a major in Theater Arts Performance and a minor in Special Education at San Francisco State University.

NF: What’s your favorite part about working at the art studio at Camp Newman?

AA: I do two things there. I’m like a parent liaison and I do art. Working with the kids is just great because they’re all at different levels. I just meet them at their level. There are certain kids that come year after year and so I know what they really liked to do. I actually really, really like working with siblings because [neurotypical] siblings will come too. They don’t get enough attention. It’s like the kids with disabilities take up all the air in the room and this is what happened to my daughter.

I really give them a lot of attention when they’re in the art room because they may not seem like they need attention, but they do, they love it. The other kids have their counselors. I love working with the adults because we do an adult art project. The adults always say, “I’m not creative!” But everybody has an imagination.