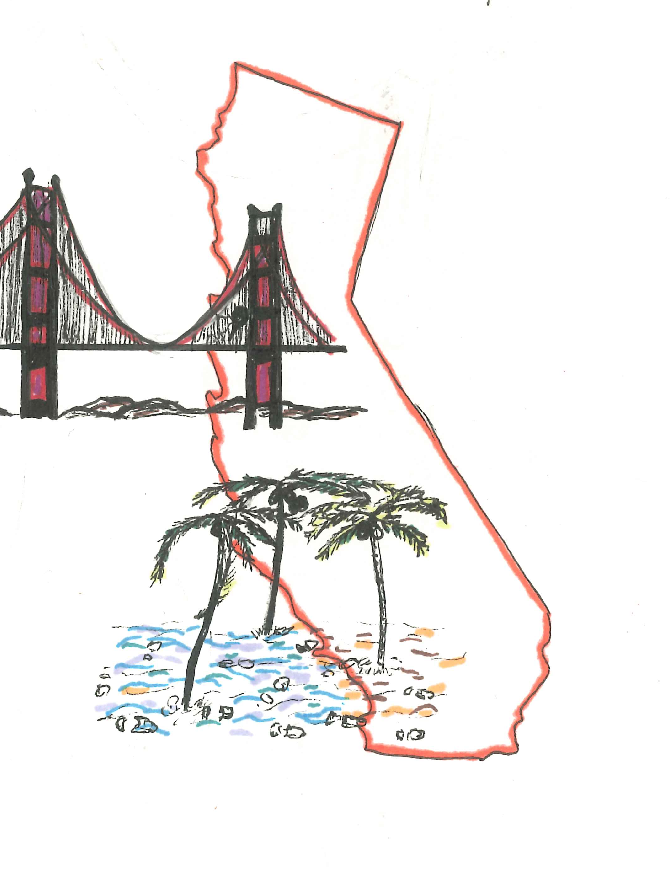 From Tel Aviv to Santa Cruz

Written and Illustrated by Natalie Friedman

In the last issue of Leviathan, I wrote about a time when I explored Israel for two months. This experience prompted me to explore someone else’s experience in a reverse situation: coming to Santa Cruz from Israel. I met with Galia Rosen and Mor Fischman, a pair of friends who met when Galia’s husband showed Mor around Santa Cruz. Rosen moved to the US in 1997 and teaches Hebrew at the University of California, Santa Cruz. Fischman moved to Santa Cruz in 2014 and stays home with her young children. We sat down at the Kresge Provost’s home and spoke about their transitions from Tel Aviv to Santa Cruz. Throughout our conversation, I began to realize that while Galia and Mor feel they need to actively pursue Judaism in Santa Cruz, Israel can provide an environment in which it is natural to fully embrace one’s Jewish identity.  This interview is condensed and paraphrased for clarity.

Natalie Friedman: Where in Israel did you grow up?

Galia Rosen: I grew up in central Tel Aviv until age twenty-nine.

NF: What were you doing in Israel before you came to America?

GR: I went to Tel Aviv University for Hebrew Literature and Education. I switched to Computer Programming at twenty-six and worked at startup companies in Israel. I wrote patient education software that tells patients how to take care of their health. I still do a little bit of computer programming in Santa Cruz.

MF: I was working on information system engineering. Now I am working in Israel [from Santa Cruz] on the computer.

NF: What prompted you to move?

MF: I moved two years ago because of my husband. He worked for an Israeli company that was bought by an American company. They needed someone in the US, so we chose the West Coast. We had Israeli friends in Silicon Valley which was an “anchor”, but I didn’t like what I heard about the area of Silicon Valley. At first, I studied information systems at Be’er Sheva University. Then I studied Waldorf education, which is a method of teaching I use with my children. My older daughter was educated at a Waldorf center in Israel. The private [Waldorf] school in Santa Cruz is less expensive compared to other cities, so it seemed right for us. We also saw the hippies and sea surfers. My husband came for a visit and Gali gave him a tour. Gali knows everyone. Luckily, it was an easy transition. I have two daughters and one son, and my two daughters miss our family and friends in Israel. My younger daughter still wants to go back to Israel. I don’t know how; she came here when she was three. It may be related to TV shows she sees at her grandmother’s in Israel. My other daughter is scared to go back because she already started school and is now comfortable here.

NF: Did you feel welcomed?

GR: Santa Cruz is more warm and welcoming than Seattle was. Everyone is outdoors, and a neighbor is willing to talk to you.

MF: Very welcomed. At first, at places like Trader Joe’s, people asked me what language I was speaking. People would say, “Are you Israeli?” or, “I’m Christian, but I love Israel!” Everyone was interested. My 25-year-old sister and her 28-year-old boyfriend love Santa Cruz for the surfing. They were here for three weeks. After a hike, they found a paper on their car with really harsh words about Israel. They think it was someone that they bumped into during a hike. It was a surprise because we thought we were in La La Land here.

NF: What do you see as your “identity”?

GR: Israeli-American. Two of my kids were born here and I have already gotten used to the American culture. At the beginning in Seattle, there were always Israelis around me. It was more about my friends and not about the kids. Now, my children are older and going to public schools so my circle of friends is American. To be Jewish, you have to work for it more here than in Israel. My Israeli identity is stronger than my Jewish identity. When I was in Tel Aviv twenty years ago, I found that there was more distance between professors and students than in Santa Cruz. We did not speak of personal stuff. I am getting a lot of, “I broke up with my boyfriend, I cannot come to class” or, “I lost my cat, I looked for it at night and I couldn’t see.” At Tel Aviv University, I would never say such a thing. In both small and big classes, there was no relationship between the teacher and student. I like it here. It is more personal, people come to my office hours, and we are talking about other stuff. I love it, I think it’s very important.

MF: Israeli, totally. My daughters had Judaism in their kindergarden in Israel. We used to have grandparents’ Shabbat dinners. We had these rituals. But you come here and you don’t have it, so we have to create it for ourselves. You get more ‘Jewish’ here than in Israel.  I found myself making challah on Fridays. I wanted it to be a special day because in Israel, it is a special day. We tried a few temples and found Kadesh Yamenu. We found ourselves coming for the children’s programs–a place where you can feel the holidays, including Shabbat. You have to be active about it.It was surprising for me to meet Jewish Americans. To me, it feels like Jewish Americans and Jewish Israelis came from the same place and then there was a split. We became different groups and now we have different cultures. When we came to the temple, we were sure we would hear the songs we knew, but–nothing. Kadesh Yamenu had completely different melodies. It’s interesting to see.