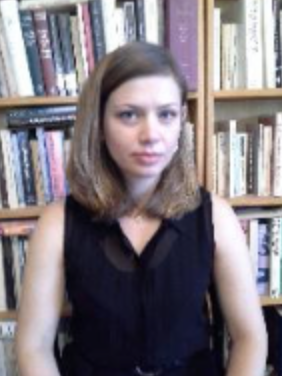 A Conversation with Professor Alma Heckman Josh Frank: What has been your most enriching experience at UCSC?

Alma Heckman: I have been at UCSC for seven months at this point. I have enjoyed getting to know my colleagues in History and Jewish Studies while learning more about their research. I began teaching in the winter with a survey course on Jewish history of North Africa and the Middle East. Working with the students in that class as well as [in] my current seminar on Jewish Radical Movements has been highly rewarding.

JF: Have you encountered any challenging questions from students or other teachers?  How did you respond, and in any applicable cases, diffuse the tension?

AH: Inevitably, researching and teaching in the field of Jews in North Africa and the Middle East comes with controversy. Many students have had little to no prior exposure to the history of Jews in a region that is often in the news, and many have strong opinions on a number of controversial issues and the many upheavals in the region over the 20th century. It is important to emphasize the fluidity of identity, and above all, historical context devoid of teleology [from the Greek telos, meaning “end” or “purpose” — having an “end” result in mind to explain the past — e.g., seeing all of Jewish history as an inevitable road to the Holocaust]. l encourage students to think of the perspectives of historical actors in situ, without the privilege of knowing the future, considering moments of historical possibility, conjuncture, and contingency.

JF: Tell me about some of the texts you’ve published. Are you currently working on something new?

AH: A couple of years ago, I published an article with one of my undergraduate mentors, Fran Malino, about the Alliance Israélite Universelle at the Chicago World’s Fair in 1893. [The Alliance is] a Jewish philanthropic organization that was founded in Paris in 1860 with the goal of “regenerating” the Jews of North Africa and the Middle East and the Balkans through education. I just finished edits on an article about Moroccan Jews during the Vichy period, and I’m working on another about theoretical frameworks to address the trajectories of Moroccan Jewish Communists in the 20th century. I’m transforming my dissertation, Radical Nationalists: Moroccan Jewish Communists 1925-1975, into a book manuscript.

JF: Where did you grow up? Do you think your environment has influenced your passion for researching and teaching themes like syncretism in history?

AH: I’m originally from Chicago, and the house I grew up in is a few blocks away from the following institutions: Louis Farrakhan’s house (of the Nation of Islam), a Sunni mosque that is not affiliated with the Nation of Islam, a reform temple that dates to the late 19th century/early 20th century, the Chicago headquarters of the Rainbow PUSH coalition (of Reverend Jesse Jackson), Muhammad Ali’s house, and Barack Obama’s house. Such an environment, plus growing up with two academic parents working at the University of Chicago, certainly influenced the way I conduct my research and the overlapping, syncretic, and synchronic questions I find so fascinating.  I’ve also been drawn to studying different languages and grew up in a bilingual environment with English and French.  When I decided to enter the realm of International Relations, I was torn between studying Chinese and Arabic. I ultimately decided to learn Arabic.

JF: Do you have a personal connection with Judaism, or is Judaism strictly an area of intellectual exploration?

AH: My mother’s family is Ashkenazi Jewish. My grandfather’s family emigrated from Prussia in the late 19th Century, while my grandmother’s family came from Buchach, Poland, arriving in the US in the early 1930s. My father’s family is a combination of Okie and Appalachia–very religious Baptist. My parents themselves are not religious, but growing up we celebrated every holiday. My mother in particular wanted to make sure my brother and I were familiar with the major holidays, basic prayers, and above all, foods. Thus, Judaism for me has always been a strong cultural force, and very much part of my identity.